Batwoman is the character that really got me invested in comics as a print medium. In the early days, I was just pirating things left and right, testing the waters to find out what I liked. And then I downloaded Detective Comics #854 by Greg Rucka and J. H. Williams III. After maybe 4 pages, I stopped, got in the car, and went to the comic shop to see if I could find it in print. Williams’s art was so incredible that it felt like an incredible disservice to read it on my computer. His arc with Rucka (collected as Batwoman: Elegy) is still my favorite run in comics. When Williams and W. Haden Blakman took over Batwoman’s solo title in the New 52, I was sad that Rucka wasn’t a part, but the duo quickly proved that they could continue the pre-52 legacy of the character. Until it got shit-canned by the idiots at DC, Blackman and Williams were building the best character ensembles in DC’s line. Each arc built subtly on the previous arcs while also telling awesome, self-contained stories with stunning artwork. The world surrounding Kate was so wonderfully realized, as each character got their time and moment to shine. I will never forgive DC for the way that series changed (and I can’t believe I’m capable of getting angry about a comic book).

When Blackman was announced as the writer on Marvel’s relaunch of Elektra, I knew it would be worth checking out. And then I saw Mike del Mundo’s art. The forces of Batwoman have aligned again. I know it’s now a common theme, but Elektra #1 is exactly why Marvel gets the current comic world and DC continues to flounder in the 90s. 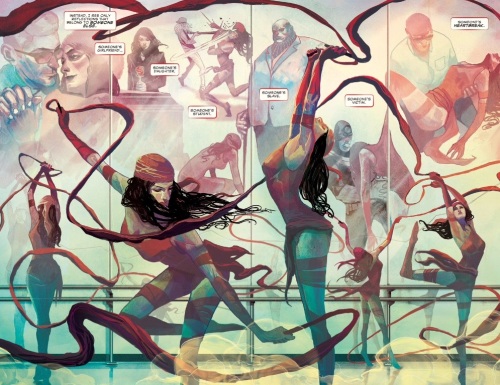 This is a perfect example of the way art and story can supplement each other to tell a richer, more complete story than either on their own. I love the exposition sequences that quickly catch us up on Elektra’s history (this is a #1) and the new villain Bloody Lips. Del Mundo’s incredible page layouts naturally propel the story forward while providing the pertinent backstory to catch up unfamiliar readers. I especially love the dual storytelling happening in the introduction to Bloody Lips, with his backstory happening in the top half of the page, while the current story moves forward in the bottom.

One of the things that has me most excited is how Blackman sets up the possibilities for this world. What made Batwoman so great was her rich, supporting cast, and Elektra seems fit to follow that train. In addition to Elektra and Bloody Lips, we also meet The Matchmaker, an assassin pimp straight out The Great Gatsby, and Cape Crow, the ultimate target. And of course, Matt Murdock is lingering over everything. But the moment that hooked me came as we realize what Bloody Lips is really after. We assume it is Cape Crow, but instead, after fighting through a group of S.H.I.E.L.D. agents, he ends up at Bullseye, who has been kept in hiding by Nick Fury following his defeat to Daredevil in that series. Given his history with Elektra and Daredevil, I’m super pumped to see what they do with this.

I’m not sure how many del Mundo issues we are going to get a year, given his painterly, intricate style, but hopefully they’ve planned for fill-ins that can match the aesthetic (much like they did with Trevor McCarthy on Batwoman. As long as Blackman stays on writing, I think Elektra will fill that Batwoman gap in my comic soul.

Marvel continues to make DC look like the meathead, Ed Hardy-wearing cousin that they are with yet another amazing first issue. Yet again, they pull from the creator-owned model and let Kaare Kyle Andrews write, pencil, ink, and color Iron Fist. This is a fresh take on the character, and in the essay he’s penned in the back, Andrews says that “Some of it will feel ‘off’ and may be flat out ‘wrong.'” I’ve got no history with Iron Fist, so I don’t care.

Andrews splits the issue between two stories: the first, set in the present, sees Danny Rand (aka Iron First) silently eating dinner with a young, pretty journalist who never seems to notice that her subject hasn’t spoken.

Throughout the date, Danny has flashbacks to his childhood, as his father led him, his mother, and a tourguide on an ill-fated journey up a mountain in search of the magical city of K’un Lun. 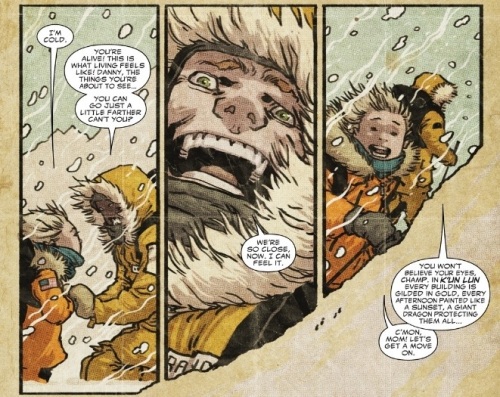 Andrews switches art-styles for each story, with the present tale saturated in reds and blacks, while the flashback looks like old school newspaper comics. I love artists who are able master and integrate divergent art styles in a seamless way, and Andrews continues to mix it up with great hand-drawn sound effects and periodic mono-chromatic sequences.

The result is a book that begs you to linger over it. There’s so much thought and concentration put into each page and the action and narration flow seamlessly together. And although the tone of the book is bleak and depressing, there are flashes of humor, and in the painstaking way Andrews puts everything together, you can tell he is having a blast. I’m not sure how long he’s going to be able to keep doing the whole thing, but I’m on board as long as he can.