For some reason, I had originally planned for my classes to each watch a film by Michael Haneke. Obviously, I am an idiot. During the course of the class, it quickly became apparent that they wouldn’t necessarily produce a productive class conversation. Most of my students are fairly new to looking at movies the way I’m asking them to, and Haneke is clearly a step too far. So, I reworked my schedule and replaced him with two films from Wes Anderson. I thought I’d lighten the mood while also working towards an easy example of an auteur. We watched The Royal Tenenbaums  in my first class and Rushmore in my second.

As prep work, I also watched Bottle Rocket, The Darjeeling Limited, and Fantastic Mr. Fox. I had never seen Fox, and the other two maybe only once. I’ll probably have a “best of” list later once I can catch Moonrise Kingdom again.

I was struck by a few things in this Wes Anderson binge. First, it’s incredible how much of a leap he made from Bottle Rocket to Rushmore. There aren’t a lot of signs in his debut film that he would become one of the most visually distinctive directors in the world (maybe in film history). Largely hand-held, there are only a few smattering hints at the visual proclivities he’d become famous for. Instead, it is the thematic things that are forming: mental illness, perpetual adolescence, grandiose plans, failed potential. All of these things will be dealt with more overtly as his career continues. 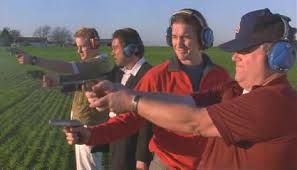 Between Bottle Rocket and Rushmore, something clicked. Suddenly, his camera is purposeful and directed, not the handheld, verite style of the earlier film. This is a director’s movie. Although he occasionally uses over-the-shoulder shots in conversations, they are increasingly replaced by dead on, fourth wall breaking portraits. Conversations are done in shot/reverse-shot with the camera taking up the position of each speaker.

And he’s initiated his horizontal tracking shots, perhaps most effectively when Max is attempting to build an aquarium on Rushmore’s baseball diamond. As Max walks parallel, he is forced to stop to take care of minor issues with minor characters, a tendency that Anderson will come back to again and again in his career. These tracking shots are supplemented with his 90 degree angle pans that sweep the screen and replace a more conventional cut. Quickly, these pans won’t just move left or right, but up and down as well.

What’s great about Rushmore is how this style serves the comedy; the pans and tracks and dead-on framing embellish the material and make it feel alive. My favorite example of this is a sequence between Mrs. Cross and Max in the library. The scene begins square on Mrs. Cross as she reads at a desk. When she runs out of water, Max’s hand enters screen left with a pitcher of lemonade. As he leaves, we get a reverse shot of Max at his desk. The editing reveals that they are sitting right across from each other, but it seems to have happened without Mrs. Cross noticing. Thus, the editing and framing cue us in to Max’s creepy, stalkerish obsession. He could have cut to a two-shot parallel to them, but that wouldn’t have been as funny as it is now. When Anderson isn’t on his game, his idiosyncratic camera-work happens in spite of the script, rather than in aid it (something I would say The Life Aquatic suffers from). But in Rushmore, everything just clicks. The Royal Tenenbaums is a heightened continuation of Rushmore. In Rushmore, what will become Anderson’s hallmarks are localized in Max; in The Royal Tenenbaums, every character is their own, weird little person, complete with costume and affectation. In many ways, this is the film’s weakness. Whereas Rushmore really pushes its worldview through dialogue and interaction, so much of The Royal Tenenbaums is obvious visually. Only Royal seems really to carry the screen the way Max was able to. He’s also the least “curated” of the characters, and we learn about him through action less than affectation.

But I was struck by how much of The Royal Tenenbaums has stuck with me, even though I hadn’t seen it in so long. When Nico’s “Some Days” started playing, I was all in. It doesn’t matter how much he uses that slow-mo, I will love it every time.

I fell out with Wes Anderson after The Royal Tenenbaums. I like The Life Aquatic, but not as passionately, and The Darjeeling Limited just didn’t work for me (I like it much better now than I did then). I never even saw Fantastic Mr. Fox until last week. But I’ve loved his new films, Moonrise Kingdom and The Grand Budapest Hotel. In particular, I think Budapest is a real step forward. It’s the most pristinely photographed of his films (in class, I just randomly went from scene to scene thoughout the film, and every one was a perfectly framed image), but it also has one of the best performances in any Anderson film: Ray Fiennes’s Mr. Gustav. Somehow, inexplicably, he doesn’t feel like a character at all. And its emphasis on plotting is also an interesting development. I hope this is just a signal that Wes Anderson is going to continue pushing himself while maintaining his own style.