Bergman and other stuff

Teaching two Intro to Film classes this last quarter really reinvigorated me to watch more movies. I’ve been watching fewer and fewer movies every year since I graduated, so I decided this year I was going to change that. I’ve really been focused on watching films that are new to me, to choose films on instinct, and to explore broader ideas or concepts that interest me. This has lead me to three particular focuses.

First, I’m trying to go back through Jean-Luc Godard’s career, filling in blind spots and re-looking at things I haven’t seen for years. Godard is my favorite director, and I’ve found watching his later work really rewarding. My goal is to create a fairly comprehensive list of Godard’s career. There are things I won’t be able to get my hands on, but I’m hoping to hit most of the major stuff. This is a slow process because I’ve found myself watching his films multiple times. With his later work especially, multiple viewings are crucial to parse out what he’s going for. Godard’s just one of those filmmakers where the films get better every time you watch them so I’m content to really take my time.

Second, I’m trying to watch more Chinese films, particularly modern Chinese films (Hong Kong films too). I’ve sort of honed in on Jia Zhangke, as he’s probably the biggest non-action Chinese director in world cinema. Modern China is a fascinating subject to me, and Zhangke approaches its development in a way that is provocative, nostalgic, and political. So far, I’ve really enjoyed his films, and hopefully I’ll have a longer write up once I get through all of them (again, some are more difficult to get your hands on). I’ll also be looking to Hou Hsiao-Hsien and Tsai Ming-Liang to round this out. I’ve seen a couple films from each of those directors, and their style is right in my wheelhouse.

Finally, I’ve decided to fill in a major blind spot in my film education, Ingmar Bergman. I know that Bergman sort of became a cliché, but his films had an undeniable impact. Strangely, I’ve only seen Wild Strawberries and Persona. I watched both of them so long ago it’s as if I haven’t watched them at all. So I’m really approaching his work completely blind. I’ve never really read anything in-depth about him, and probably my greatest exposure is through Woody Allen’s films. Because so many of Bergman’s films are available through Hulu, I’m going to try and approach these chronologically. I’m not sure there is a filmmaker of Bergman’s esteem that I’ve been able to really approach from the beginning and with a clear palette, so I’m interested to see how this goes. I’ll be trying to update this with each film or two I watch, and we’ll see what happens. Again, this is a more long term project, as Bergman made a ton of films, so let’s hope I can stick with it! If it does, I might try this with some other directors I’m ashamed I’m not more familiar with, particularly Akira Kurosawa and Yasujiro Ozu. But that’s getting way ahead of myself.

So, to get this ball rolling:

Crisis is Bergman’s first film. A renowned director’s first film is always fascinating, but generally more so in retrospect. Most directors don’t come out guns blazing like Welles, Godard, or Truffaut. This is definitely more inauspicious than guns-blazing. The story follows Ingeborg (Dagny Lind), a poor piano teacher in a small Swedish town (presumably up north). She has been taking care of her sister Jenny’s (Marianne Löfgren) daughter Nelly (Inga Landgré) since she was born. Her sister moved to Stockholm and led her own carefree life. After 18 years, Jenny returns and wants Nelly back. She brings her conniving beau Jack (Stig Olin) with her, who gets Nelly drunk at a town party, which disgraces her in the eyes of the conservative town. Ashamed, Nelly decides to leave with her mom.

It’s a melodrama (of course, Ingeborg is suffering from an unnamed, terminal illness) that initially feels like something Hollywood would have produced. By the end, though, it twists the conventional melodrama into a really dark, disturbing picture. It becomes clear that Bergman is really interested in the power relationships; the twisted plot allows him to explore how people use other people for their own gains. Jenny is attempting to buy Nelly’s affection with gifts and money, Jack is using Jenny for her wealth all the while getting close with Nelly, while Ingeborg is struggling with the child she raised.

After Ingeborg makes an impromptu visit to Stockholm, the tension boils over. Jack seduces Nelly and Jenny catches them in the act. We learn that the sob story Jack used to seduce Nelly is just that, a fictitious story (one he presumably used on Jenny as well). At this point, all three characters realize the sham that their lives have been. Nelly, initially presented as a strong-willed but naive teen, quickly realizes how she has been easily duped by the lure of “modern” life promised by her bio-mom; Jenny realizes that Jack has just been using her all these years, but that she’s also been using Jack (and that really she is using Nelly as well); and Jack, well, Jack realizes that he’s a parasite. It’s clearly been eating at him, but this chain of events pushes him over the edge and he makes a drastic decision to kill himself.

The film ends with Nelly returning to Ingeborg and their small town. Although this is clearly a “win” for Ingeborg, it doesn’t seems as if it’s Nelly’s ideal. She has an older man, Ulf, waiting for her, but she doesn’t love him. The final shot sees them walking down the street, not too close, but together nonetheless (to paraphrase the voiceover). It’s a hardly a happy ending, and although Ingeborg will be able to live out the rest of her life with Nelly, we know that Nelly’s struggles have just begun. What she learned in the time away has profoundly impacted her relationships. Even if she marries Ulf, it’s unlikely it will be a profoundly happy union.

Stylistically, there’s nothing to remarkable about the film. Everything is shot fairly conventionally. There is one interesting montage sequence where Ingeborg is lying awake thinking about Nelly that becomes increasingly frantic until she leaps out of bed claiming she doesn’t want to die. But it is really the beauty shop scene that hints at what I hope is coming from Bergman. The cinematography in this scene is fantastic: 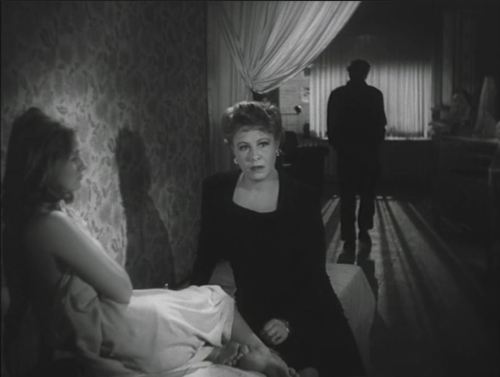 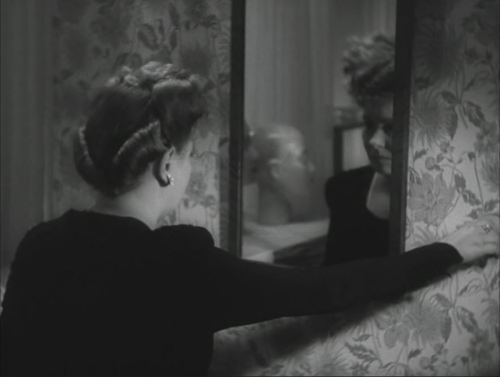 This is really the only scene in the film that feels at all stylized. The use of shadows is pretty fantastic, and we get the great shot of Jenny behind the curtain surrounded by mannequin heads. And I’ve also heard just enough about Bergman to know this isn’t the first mirror we’re going to be seeing.

Overall, a interesting if not spectacular beginning. I like the way it twists the family story, poses questions about parenting, power, sex, and death, and blooms into something original. I’ll probably watch this again once I’m done with the whole project as sort of a final capstone. For now, onto Port of Call.